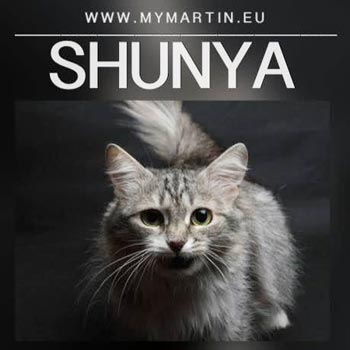 In the spring she had the surgery to remove a tumor from the liver. Veterinary said that it’s age at least 7 years, but i do not think that she is so old cat because when i saw it first time Shunya was looks like 2-3 years old cat but here is her hard story:

In the beginning people found her in clothing market. They decided to keep her there between stalls. She lived there and ate mice…but one day the guardians of this market shot all the cats out of the air gun: they killed many cats and Shunya also recieved a pellet in skin and a kick in her teeth: after this terrible case Shunya lost all teeth. And it was pregnant ….Only after such unreal awful case people decided to give her from there and i took her on foster there she is livinf now almost 2 years: she forgot all hard fate and hard surgery: now she is absolutely normal cat who loves to play and cuddle.