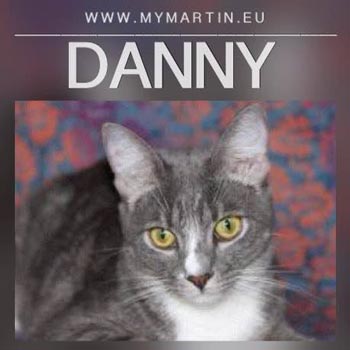 Danny is a smoked color cat, young boy 1 years old. He is a big and very beauty cat.

The cat was thrown out by people in zoo-shop: he was a newborn kitten with closed eyes. Volunteer found him surrogate mother cat, who nursed him and in the age of 1 month volunteer took this cat home on foster.

By the nature – Danny is very confident and inquisitive cat. Very clever and crafty. Loves to recieve people’s attention. Danny is a quite cat, adores toys-stick with feathers. Can plays for a long time with human, because he very much loves the process of the game and loves that people give him attention. About his intelligence: he can find any toy which you keep..behaves like Sherlock Holmes 🙂 He quickly learned how to open drawers in the dresser so we had to wear rubber bands on for that it was difficult to open, as do the protection of children, because he pulled these sticks with feathers and went roaring like mad with them in the teeth, not giving them to other cats, trying to hide them in an apartment and dig , greedy at all 🙂

Get along well with all cats, by the nature not a lidder, not dominant, never fight. Also good with dogs.

In the mornings like often interests what we’ll have on breakfast, make it very carefully because knows that we criticize for it.