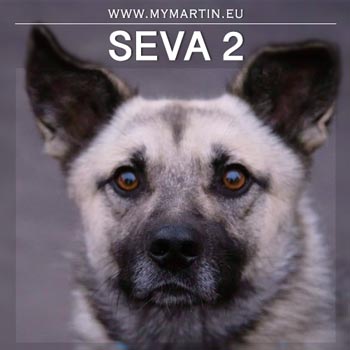 Seva, a young guy about 1-1, 5 years old (born in the middle or end of 2018). Shoulder height about 53 cm, weight about 20 kg. Vaccinated, chipped, treated against all parasites. Castrated. Absolutely healthy. Walks on a leash very well. Goes by car well – he doesn’t have sickness. Seva’ s appearance is charming. He has beautiful eyes, big and bright. A little shortened face and very good-looking beige fur. A smart boy, we should say. Seva is very human-oriented.
I met him in the street. I was going back home late night and saw this pretty wandering boy near the metro station, the south-western part of Moscow. He was running around the square near a shopping mall and looked people in the eye. But all were in such a hurry, no one took paid attention on him. I was standing staring at him, having in mind:” How I can help him now?” I was afraid to be late for the train, but neither could I leave this kind soul, searching for his man and food. He was restless. I felt nervous looking at him, but couldn’t find the way to help him at night. I called my friends volunteers, and one if my friends told me to take a taxi. So I called for one, but the taxi driver didn’t want to take me with a dirty dog. In the end, he agreed to take me with the dog for double payment to the foster family.

Seva entrusted himself to me immediately, and laid his body on me as we were going to Christina, to the foster family. The taxi driver was so impressed by my initiative and of course by Seva’s intelligence, who understood everything, entrusted himself me and allowed me do all these things with him what I did. The driver said without any doubt:” It’s betrayal, he was a home dog for sure!” I couldn’t disagree with it. It is exactly like that. Probably, Seva was taken as a puppy and the seller told it is an East European Shepherd, and when the dog grew up he turned to a mix. Probably, Seva was taken from a shelter or curator, as a puppy, and getting rid of him later, brought him far away from home. If Seva would be near his home, she would return. But these are only suggestions – we don’t know anything about his past.
For now, the foster family are very positive about Seva. He gets along with 5 other dogs and cats. He is allowed to sleep on the floor on a mattress, but of course he would love to lay of the sofa by his lovable master. I hope, his future master will allow him a lot, he deserves the best. Seva could live in a separate house with an outdoor run (garden). Now he eats natural food – cereals with meat. Sometimes he is given dry and canned food. Seva is friendly to everyone, including men and children. We can say, Seva is an ideal dog for all people who can love animals and be sensible of their past.