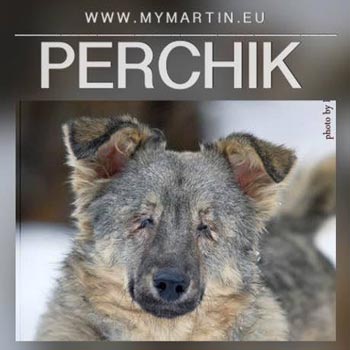 Our volunteer took this dog from shelter in other russian city. Perchik has abnormal underdevelopment of eyes, as ophthalmologist said. This is typical for the breed – Collie. We think that he could see shadows because he reacts on light and we saw how he tried to catch flies. His eyes as though are closed, and there are small slits, which I think he’s trying to see something.

Now Perchik deals with cynologist, which teaches him to focus on the scent, because Perchik, while the blind from birth, trying to use eyes, probably due the fact that he is not blind.

His age is 11-12 months, he is already an adult male, although the appearance and behavior like a puppy. Height at the withers near 40 cm, it is fluffy.

By the nature he is very peaceful, not a leader, loves to play and always in good mood.