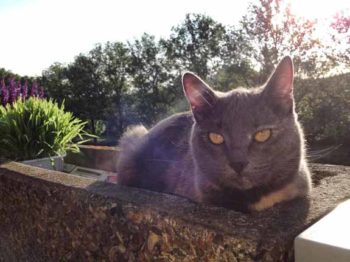 Mara was found with newborn kittens in the stairwell of an apartment house. According to neighbors of the porch before she lived in the same entrance at drunks who were thrown her out of the window from third-floor to walk, and when came home by herself, it lasted six months, until she became pregnant and alcoholics stopped to let her in. Children residing in the same hallway, dragged and closed her in the attic, they built her small house in a box, fed, brought milk, until she gave birth to kittens. And the same day she was just thrown by house-workers and children immediately called me by volunteering number and asked to take her to the shelter because cat with kittens in their entrance would not survive.

The cat is unique, because for me it is a mystery, so much composure and tranquility I have not seen in other cats, you can even say that she is a little bit strange : Loves to play, but when I took her home – she could not and did not know what to do with toys, loves to sit on hands but always with such bewilderment, seems like she do not understand for what she recieves good and careful attention.

When caress her, talk to her while she is sitting on a chair for example, she really likes it, though bright emotions I had never seen from her, she is always calm, always! She is not curious, but likes to climb on the shelves and to sleep in my documents, folders, paper and on the computer. Get along well with all cats, never conflicts with no one, also does not fears dogs.