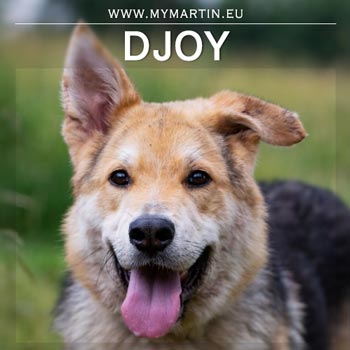 These photo’s from DJOY are from the past days. We adore him. He likes to walk, to ride by car. And he loves us very much. He is kind to all people who comes in our home or outside.
We are lucky to bring joy in his life.

3. Appearance – dyed coat, similar to the Eastern European shepherd. Wool of medium length. The left ear is hanging, but the right one is standing bravely.

7. The history of the dog

Djoy appeared in the village near Moscow in early June 2018. Where did he come from? No one knows, nobody here has seen him before. The dog had an old shabby collar without any identifying signs. Djoy reached out to people, wanted to play with other dogs and generally acted as if he had always lived there. During the day he played with children in playgrounds, in the evenings he went on walks with other dogs and their masters. Where he spent the night – no one knows. Djoy ate food people gave him and he lived very freely. True, his friendliness and absolute trust to all people, even those whom he does not know, often played a cruel joke with him. Not all people like dogs, and many homeless dogs do not like dogs at all. Got Djoy for sociability and a desire to talk – once he was severely beaten with a stick.
Most likely it would end sadly, because, no matter what, Djoy continued to believe all people without exception, and such dogs, alas, do not live long in our cruel world.

But Djoy was lucky – thanks to the help of local residents who could shelter him for a while and keep the house for several days, he was taken away from the street and taken to the shelter.

Character of Djoy is beautiful – he is friendly, active, there is no aggression in him, but there is curiosity and very strong affection. He gets along with other dogs and tries not to respond to aggression, gets along with cats (he spent several days in a family who had two cats at home before going to the orphanage), he treats children well, loves to play.

Trustful and open, Djoy very much needs a loving family where he will be looked after and never allowed to be offended.

10. Attitude towards adults – friendly with all people, adores the human company.

11. Attitude towards children – suitable for families with children older than 10 years.

12. Attitude to other males and females – friendly to dogs, does not respond to aggression. A peacemaker’s dog. She lives in a shelter with a female dog in one aviary

13. Attitude towards cats – Lived with cats for a couple of days. Ignores.

14. Attitude to other animals – does not pay attention.

15. As he walks on a leash – to the leash is accustomed, quietly walks by the side, adjusts to the mood of the conductor.

16. Does any team know: successfully studying the team. Works with a professional canine in the shelter.

18. Can he stay at home alone – he does not howl, does not bark, does not spoil anything.

19. Toilet – accustomed to a two times per day (shelter schedule)

20. Toys – walks next to a man, but very easily responds to an offer to run or play. Very much feels the mood of a person and is easily adjusted to it.

21. Wishes for owners – suitable for any family, maybe a second dog.

22. Wishes at the place of residence – all options for living are considered.