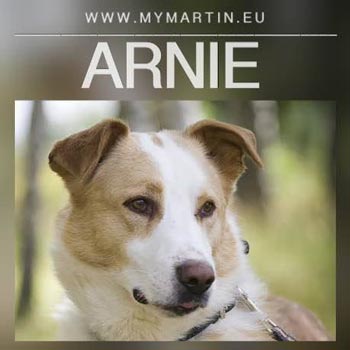 Arnie was born in 2009, neutered, rich yellow color with white. 55-58 cm at the withers
There is a small yellow spot on the headn – it beautifully stands out against the white color.

Arnie handsome young dog. Very good walking on a leash. Loves to cuddle and play. Friendly and takes care of his neighbors in shelter cage. Friendly with all dogs.

But recently, he was quite different. When I saw him at the shelter in the pen – it was a shy and reserved dog. He did not understand why and where people put him. All the while hiding in a booth, in spite of his majesty. God, what he was (and is) a beautiful and vulnerable – he did not come, all the while hiding in a box. Did not trust people. After all, he had been betrayed. After a while I was able to put a collar on him. And then took it outside.

The first time he went and lay on snow and could not understand – what is it? – Froze ? he did not move. Recovering, slowly began to move on all fours. Walked a bit, and again in the aviary. Second and third time was almost the same but on bent legs. And then it all fell into place – he realized that there is another life outside of the cell in which it sits. There is a world where you can relieve themselves, to run and play with other dogsб on summer run on the green grass and enjoy the sun, caress by his master-volunteer. And now, in winter, to lie and dig in the snow.

Now i look at him and i am happy – here’s another one crossed the barrier and he believes me – believe that there is another life, there are good people here!

And Arnie became different. He realized that there are people in the world good, merciful, ready to love and save him. We opened a little window into another world, and I hope the window thrown open and he will find the good loving owners.

He is waiting for you – for his owner. Arnie will be faithful and best friend. Give him faith in people. Give him a chance – to live and to enjoy this life.